by Chris Perkins (Geography, School of Environment and Development)

Maps tell many different stories and their social significance and reach waxes and wanes. In 2011 mapping has gained a striking cultural popularity, with the form more frequently deployed than at any time in human history. A huge profusion of maps are called into being on desktops, mobile devices and as hard paper copies. Across society there is a fascination with mapping – planners map out possible developments; scientists communicate results in mapping; politicians use maps to persuade; the media use mapping to attract attention to stories and evidence; and in everyday life prosaic uses of mapping develop apace, from practical devices to help us navigate the city, to strikingly different views into a past long gone. More people are making maps now than at any time – DIY cartographers collaborate to map the city in new ways and artists use mapping to question taken-for granted certainties about urban life. So maps are very much on the agenda.

This blog posting is an intervention in the process of researching the roles that mapping plays in urban life. It relates to a search for Mancunian cartographic narratives – a progress report, highlighting some of the stories that will feature in a monograph to be published by Manchester University Press in 2013, but also revealing the often ambiguous and contested roles that mapping has played and continues to play in urban life, and the challenges maps present for researchers.

At the beginning of 2009 Martin Dodge and I designed a new public exhibition – Mapping Manchester: Cartographic Stories of the City – that sought to reveal some of the significant ways in which mapping is ingrained into urban life. It demonstrated how maps work and change over time in response to technology, society and economic imperatives, highlighting visually striking maps of the city.The Mapping Manchester exhibition was on display in the Historic Reading Room of the John Rylands Library on Deansgate, Manchester from June 2009 until end of March 2010. It showcased the wealth of cartographic material held by the University of Manchester and other institutions in the city – with generous loans of material from the Manchester City Library and Archives, Chetham’s Library, and number of individuals, including little seen maps and obscure plans.

The exhibition proved the most popular to be mounted in Rylands, generating considerable media coverage and public interest. It kick-started an ongoing research interest in the mapping of the city, paralleling the burgeoning social interest in mapping. The exhibition revealed a series of snapshots into different mapping worlds. Our book allows us to broaden and deepen the scope of these views. We are organising material into 15 different narratives, adding to the ten themes highlighted in the original exhibition. Published mapping of Manchester has predominantly reflected elite discourses, and its development and diffusion parallels the growth of the Victorian city. Mapping charts urban growth, but also allows authorities to control space and govern sometimes unruly subjects and bodies. Housing and health continue to preoccupy mapmakers. Mapping also facilitates moving through the city, in the form of plans of newly emerging infrastructures from canals, railways, and roads to contemporary investment in cellphone coverage or fibreoptic provision. Maps of the city do not only depict what is there – they allow us to call new possibilities into being by offering views into possible futures. There is money to be made through mapping, but also in using the practical appeal of the medium to oil the wheels of capitalism and facilitate accumulation. But mapping also offers a space where alternative and more subversive voices can be heard. An environmental chapter allows us to explore the role of mapping in the greening of the city. The polemical role of maps as a persuasive form is also highlighted and a chapter highlights the often subtle interactions between maps and their makers and users. We are currently writing a chapter focusing on the current profusion of map art, from many different traditions, such as the striking displays on the Piccadilly Station Metrolink platforms from artist Daksha Patel, mapping lung tissue on to the city to question the relations of our embodied experience to the built urban form. 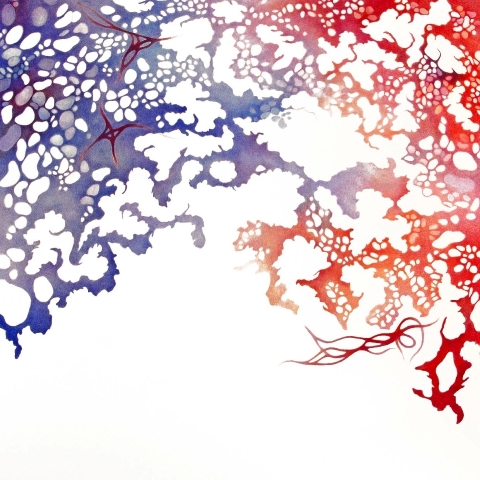 The book has space for many more illustrations than were possible in the original exhibition. A much more sustained analysis of mapping becomes possible when there is space for 120 000 words, and the book design features full colour display throughout. Researching however is often a frustrating process. The timescale for research coincides with the temporary closure of Manchester City Library, and in the short-term some material has been inaccessible. Only a tiny percentage of published mapping can be included in the finished volume. We have spent many hours trawling through archives searching for the hidden gem, lurking undocumented and unseen. Our carefully developed inclusion criteria may well privilege the visually striking over the more prosaic. We are limited by the page format. Our focus on particular stories means others are left untold.

Who knows – we may find the elusive hidden gem of the map documenting emerging global links of cottonopolis! There is still six months to go before our files close. So if you are a map addict or know of a fascinating map story please email us.