Iain Deas, Graham Haughton and Stephen Hincks from Planning and Environmental Management in the School of Environment, Educaton and Development at the University of Manchester reflect on Evan Davis’s arguments about London’s relationship with the rest of the UK economy …

In a recent BBC series, Mind the Gap: London v the Rest and an accompanying BBC blog (http://www.bbc.co.uk/programmes/b03xp6x7), Evan Davis put forward an argument that government should do more to help large and successful cities prosper – even though this means spending less elsewhere. Central to the case was the notion that cities are best able to prosper when they have dense networks of highly skilled and creative workers intermingling in close proximity, driving innovation and promoting high-value economic activity.  Both local and national economic development policy, the programme argued, ought to concentrate support much more exclusively on the small number of cities that can fulfil this role as epicentres of knowledge-driven economic vitality.

The programme singled out London as an exemplar of this form of urban economic development.  The dramatic transformation of the city’s economic fortunes over nearly thirty years, it was argued, was attributable to its ability to attract and retain skilled mobile labour from around the world, lured by a seductive mix of vibrant cultural environments, attractive neighbourhoods and the prospect of rapid economic enrichment.  Amid predictable images of self-congratulatory, coffee quaffing metropolitan hipsters, the programme argued that London’s growth should be celebrated and promoted.  Although there was acknowledgment of some of the problems associated with rapid growth and overheating – strains on infrastructure, acute housing shortages and the social and spatial marginalisation of residents left behind – these were presented simply as impediments to further growth that policy intervention should and could circumvent.  London’s prosperity, ran this argument, ought to be facilitated by accommodating growth pressures: providing developable land, ensuring a supply of affordable housing, investing further in infrastructure and continuing to meet demand for labour by stressing the city’s openness to newcomers.

Mind the Gap was in some ways an entertaining and deliberately provocative piece of television. What is interesting, though, is that it echoed much of the orthodoxy that many would argue infuses contemporary urban economic development policy – not least in Manchester.  In an open access paper published last month in Environment and Planning A (http://www.envplan.com/abstract.cgi?id=a130335c) we began to question the sorts of academic idea that underpinned Mind the Gap. Building on this, we want in this two-part blog to critique two of the ideas central to Evan Davis’s thesis. In this first post, we assess Davis’s contention that London’s ascendancy ought not only to be tolerated, but should be actively promoted by government as the best way of driving national prosperity.  In the subsequent blog, we review the second episode of Mind the Gap, which argued that by concentrating resources in a network of linked urban areas as part of a northern super-city, England’s provincial cities might begin to develop new agglomerative economic growth and follow London’s path to success.

Evan Davis’s treatise said relatively little about the role of policy in underpinning London’s transformation from merely another declining British city in the 1970s to the thrusting global city of today.  Indeed, implicit to the programme was an argument that spatial policy had been trained to too great a degree on the declining cities of the north and midlands, to very limited effect. At the same time, earlier policy efforts to manage the growth of London itself – via green belt policy or the new towns programme – were said to have undermined the city’s economy by restricting in situ development and diverting development elsewhere.

This ignores the instrumental role played by government in enabling London’s growth. The emphasis of national policy, at least until the onset of the crises of 2007-08, on promoting the financial and producer service sectors has been a major part of this.  So too has been associated spending, aimed at accommodating London’s growth via multi-billion investment in infrastructure. What is less frequently acknowledged, however, is that public expenditure in general has also been skewed towards London.  Treasury data on per capita identifiable public expenditure on services for standard regions give some sense of the capital’s favourable treatment (Figure 1).  London, the graph shows, is consistently the best funded of the English regions, and exceeded only by the special cases of Northern Ireland and (to a lesser extent) Scotland and Wales.  The unavoidable additional cost of maintaining capital city functions for the four UK capitals, and other complications such as the variable physical size of the regions and their differing social profiles, makes comparison across regions difficult.  But the extent of interregional disparity is striking nonetheless – and even greater in terms of specific types of spending, like science and technology and transport, where London and the South East again receive disproportionately larger shares than other English regions.

Figure 1:  Total identifiable expenditure on services by country and region per head in real terms,2007-08 to 2011-12 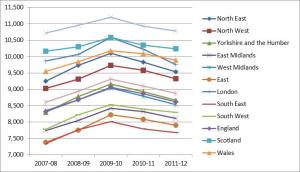 A dispassionate observer might well conclude that London’s growth has been highly dependent on state subsidy.  Moreover, data on disaggregated public service expenditure suggest a pattern for the English regions that runs counter to regional policy. And the sums involved in the latter are, of course, much smaller by comparison with spending on mainstream services. This is important because implicit to the argument of Mind the Gap was a view that past spatial policy has been ineffective in reenergising declining economies, and that public money ought to focus on stimulating agglomerative growth in a few large urban areas instead of trying to narrow interregional inequality.  Past policy for cities and regions, runs this line of argument, is wasteful because it is propping-up areas that are less ‘productive’ than London.

Yet there is an argument that previous regional policy should not to be so readily dismissed, and that it is unrealistic to expect regional economic transformation given the degree to which regional imbalance has been ingrained over a century and more.  Even at its peak in 2005/06, the national budget of £2.2b for Regional Development Agencies (RDAs) represented only 0.2% of national output.  And even in the most generously funded of the RDAs – One North East – peak spending amounted to £240m: a mere £95 per person or 0.75% of regional economic output.  These are miniscule sums, dwarfed by public expenditure directed towards London.  And the contrast becomes even more striking given the abolition of the RDAs and their replacement by Local Enterprise Partnerships, nominally private sector bodies responsible for raising their own resources and benefitting from only modest levels of financial support from government. Viewed in the context of the meagre resources allocated to spatial economic development policy and the hidden subsidy to London and its region, therefore, it is unsurprising that regional economic disparity should prove so intractable.

Mind the Gap echoed the view that past policy for cities and regions has detracted from rather than added to national productivity , and that resources could be better used to enable London’s growth to be maintained and to create mini-Londons elsewhere.  What was missing, however, was any kind of lateral thinking on how to offset the growth pressures accumulating in the London region. Yet the solution to some of London’s problems of overheating, it could be argued, rests not in the capital, but elsewhere in urban Britain.  The sensible response London’s  to spiralling house prices, one could contend, lies not in liberalising planning and releasing more land for development, but in focusing economic development policy on struggling cities and regions in order to bolster their demand for labour and displace some of the pressures from the  existing hotspots of the South East.  Supply-side policies on land and labour in London and the South East over thirty years have failed to resolve growth pressures, hence acute localised wage and house price inflation. Instead of maintaining urban containment and resisting green belt encroachment, concerned residents of the Home Counties might be better advised to lobby for more investment in the north in order to ensure that housing is affordable in the South East.

Boris Johnson, London’s mayor, likes to argue that concentrating investment in already prosperous London is justifiable not only because the city is a net contributor to the exchequer, but also because the benefits ultimately trickle-down to the rest of the country. “I’m making the argument to the Treasury that a pound spent in Croydon is far more of value to the country than a pound spent in Strathclyde. You will generate jobs in Strathclyde far more effectively if you invest in parts of London”, he told the Huffington Post in 2012 (http://www.huffingtonpost.co.uk/2012/04/26/job-creation-london-mayor-huffpost-linkedin_n_1456092.html).  A rather better argument would be to invest more in Britain’s provincial cities, linked to a genuinely integrative national spatial policy, as the best way of maintaining London’s prosperity.