Jeremy Carter is a research fellow working within the University of Manchester’s School of Environment, Education and Development. He is co-director of the Centre for Urban Resilience and Energy. 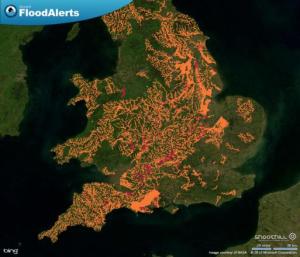 Flood risk across England and Wales in February 2014. Red indicates a severe risk of flooding. (Image from http://www.shoothill.com).

The floods that hit England and Wales over the winter of 2013-14 have pushed a series of issues to the forefront of people’s minds; not least the real risk of flooding that hangs over many communities across the country. It remains to be seen whether a progressive response can be driven forward to address the interconnected web of issues linking the causes, consequences and responses to flood events. These issues encompass diverse themes from agricultural practices and climate change to land use change and public funding priorities.  These themes are all connected. They represent different elements of the natural and human systems that combine to generate floods and associated environmental, social and economic impacts. Although there will always be calls for short term fixes from some groups, with demands for dredging rivers standing out in this particular case, the uncomfortable fact is that there are no immediate solutions to many of the issues raised by the floods. Searching questions need to be asked about the connection between flooding and way that urban and rural landscapes have been developed and managed, and about how they might evolve in the future. A concerted emergency response and recovery effort to the impacts raised by this particular series of floods, although necessary, will simply not be enough.

A noticeable theme within the media over recent weeks has been the political blame-game and mud-slinging that has accompanied the recent floods. Amongst these unwelcome distractions, one useful point was made by Owen Patterson, the current environment secretary, on the development of approaches to lessen future flood risk. He stated that,

The implications of this statement are far reaching. Effectively, Patterson recognised the need for catchment scale responses to reduce flood risk. This in turn calls for the management of land far removed from sites exposed to the threat of flooding for the benefit of those locations at risk of inundation. To take an example, until comparatively recently landowners in North West England were being subsidised to accelerate the drainage of upland blanket peat bogs by ‘gripping’ or cutting open drains along the peatland edge. Happily this practice has now been reversed, although there is still some way to go before the water storage capacity of these upland landscapes is re-established. Actions like this should be encouraged as part of a strategic catchment scale response to reducing flood risk. They are important because in the case of extreme rainfall events, which climate change projections suggest are likely to become more frequent, the capacity of existing defences to hold back flood waters may be insufficient. Measures such as this are also needed to help lessen the volume of water reaching sites exposed to flood risk.

There are major challenges associated with delivering catchment scale flood risk management responses. For example, certain sites may currently be providing important flood risk management functions to areas further downstream through the role they play in storing water and reducing the speed and volume of surface water runoff reaching water courses. However, in some cases, these locations will also be earmarked for future housing, retail or industrial development. This poses tricky questions concerning whether, and if so how, land can be managed at a catchment scale to reduce flood risk. Understandably, a local authority may be reluctant to forgo the potential gains associated with a new development to secure benefits offered by the land for residents and businesses located in an authority further downstream.

Catchment scale flood risk management responses of the type needed to reduce flood risk are hindered by the shape of existing political and administrative boundaries. These generally do not match the scale at which river systems operate. There are notable exceptions such as the European Water Framework Directive’s River Basin Management Plans, which are designed at the catchment scale to enhance the quality of water bodies and water courses. Largely, however, we are faced with a spatial mismatch. Issues such as flooding cannot be effectively addressed without the creation of new partnerships and networks, engaging agencies and organisations from different sectors, which recognise the cross-boundary nature of flood risk management.

Work ongoing within the Climate Proof Cities project, a Dutch government funded initiative on which the University of Manchester is collaborating, is bringing these themes together via a case study based on Greater Manchester and its surrounding hinterlands. Research led by the Centre for Urban Resilience and Energy (CURE) is mapping the extent of green infrastructure cover that is providing flood risk management functions to an exposed site in the centre of the city. Much of the green infrastructure that has been identified is located beyond the district at risk of flooding, and a significant amount lies beyond the administrative boundaries of Greater Manchester itself. Options to address this spatial mismatch are being considered.