Yet again this year Manchester’s city centre was a stage for Chinese New Year Celebrations, making it a perfect occasion for a family day out to experience a different culture. Manchester Chinatown is one of the major tourist attractions in the city and is considered to be the most vibrant Chinese quarter in the country, but how did it become part of the city’s architectural and cultural fabrics? 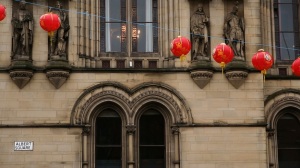 With the seedcorn funding from cities@manchester I was able to conduct an archival study on the origins of Chinatown and a series of interviews with the members of Manchester’s Chinese community organisations. What emerged from this pilot research is that the origins of Manchester Chinatown are somewhat paradoxical. From the first wave of migration in the early twentieth century, the Chinese have been the most geographically dispersed migrant group in the UK due to the nature of their occupations, first in laundries and then in take-away restaurants. Yet, the dominant social perception of the Chinese as a closely-knit and inward-looking community has persisted until the present day.

The early Chinese residents in Manchester were far from an insular community. They actively integrated into the city. An article in the Manchester Guardian in February 1912 estimates the total number of Chinese immigrants in Manchester to be around one hundred and comments on their life in the following way:  ‘They are mainly Cantonese, and when they land at Liverpool they can speak little or no English. The Manchester Wesleyan Mission (8 Cable street), under the direction of the Rev. S. F. Collier, has carried on work amongst them. A New Year’s party was held last evening at the Albert Hall’ (Manchester Guardian, ‘Chinese in Manchester’, 20 Feb 1912). In the pre-Second World War period, the local community efforts to interact with the newly arrived immigrants were paralleled by the furnishing links between Manchester and China at the national level. The pre-war textile boom in Manchester prompted strengthening links with China, and for the first time in 1933 the Chinese Kuomintang government appointed a consular representative to Manchester to oversee the day-to-day trade links with China with an office in Spring Gardens in Central Manchester (Manchester Guardian, ‘China comes North’, 11 February 1933). In 1942 The Universities China Committee in London, with the funds from the Boxer rebellion (1898-1901) indemnity, established Manchester China Institute on George street to ‘provide a place where British people could meet Chinese people and learn from them in various ways’ (Manchester Guardian, ‘China Institutes: A new one for Manchester, 11 May 1942). These facts testify to the vibrant official and community-based links which existed between China and Manchester in the early twentieth century.

In the post-World War Two period Chinese migrants keenly settled in the city and its suburban areas to satisfy British tastes for Chinese culinary.  In a parallel development, an increasing number of Chinese businesses started opening in Central Manchester, with the first Chinese restaurant Ping Hong opening its doors on Mosley Street in 1948. Recalling the origins of Manchester Chinatown, senior Chinese residents unequivocally assert that ‘there was no Chinatown in Manchester in the 1970s’. Yet, 8y the mid-1970s the local newspapers were announcing that a Chinatown was emerging in central Manchester bounded by George, Nicholas, Faulkner, and Princess Streets. By the early 1980s, the geographical and socio-cultural place of Chinatown in Manchester was secured when in 1983 Manchester City Library added the entry “Chinatown” to its catalogue of newspaper clippings.

In the 1980s Manchester Chinatown boomed, when in the span of less than ten years key community organisations and societies were set up in the quarter: Chinese Cultural and Education Centre in 1979, the Chinese Arts Centre in 1986, Tong Sing Chinese Housing Association in 1984, Wai Yin Chinese Women’s Society in 1988, and Chinese Health Information Centre in 1987. The symbolic birth of Chinatown culminated in 1987, when the Chinese Imperial Arch, physically marking the area’s association with the Chinese community, was erected on Faulkner street. 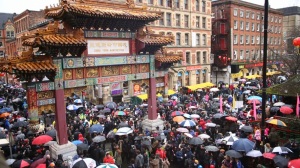 The early 1980s also witnessed an active lobbying by Chinese community leaders of the City authorities to clearly mark the boundaries of the Chinatown by translating the names of the streets into Chinese and displaying street signs in Chinese characters: ‘It may not be long now before you can walk up the Street of Capturing Blessings, turn left into the Street of Fairy Happiness and end up in the heart of Manchester’s Chinatown…. Faulkner Street would become Fuk-Ngar Gai (street of capturing Blessing) and Charlotte street Sar-Lok Gai (Street of Fairy Happiness)’ (Manchester Evening News, Comment ‘Turning into the Street of Happiness’, 21 February 1983). The attempts to translate the names of the streets into Chinese were stalled in June 1985, when the City Council designated this area as a ‘George street conservation area’ where ‘signs should be designed and located so as not to compete with the architectural details of buildings’ (Manchester City Council, no date). The value attached to the history of the area took an upper hand over contemporary social trends. 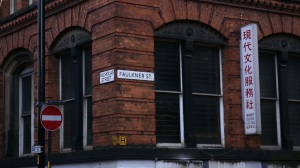 A quick browse through the historical maps of Manchester city centre from the collection of Manchester Museum of Science and Industry confirms that the area of Manchester’s Chinatown developed in the Georgian times, and the layout and names of the streets haven’t changed since the 18th century. Until the early 19th century, this district was a well-to-do residential area, centred on St James’ church built at 7 Charlotte street in 1786 and demolished in 1928. The pattern of streets and street names are the only surviving witnesses to the layers of time which shaped and transformed this area of the city. A cluster of important societies and institutions also operated in the area, including Literary and Philosophical Society at 36 George street. Portico Library was opened in the area at 57 Moseley street in 1806 and still occupies its original site. Royal Manchester Institute was built on Moseley Street between 1824 and 1835 in the Greek neo-classical style and now hosts the City Art Gallery, and the Athenaeum, a club for a society for ‘advancement and diffusions of knowledge’ was founded on Princess street in 1835 and is now linked to the Art Gallery.

By the end of the 1990s, Chinese organisations and initiatives which were founded and started their activities in Manchester Chinatown in the 1980s started relocating to other parts of the city.  Most notably, The Chinese Arts Centre moved to the Northern Quarter and was recently renamed into the The Centre for Chinese Contemporary Art, Fo Guang Shan Temple moved to Trafford, Manchester Chinese Centre re-established in Ardwick, and the Wai Yin Chinese Women’s Society moved to Ancoats. Chinese supermarkets are not limited to the Chinatown anymore and can be found in many different locations around Manchester. These processes point to the moving and changing character of Chinatown, what Doreen Massey coins as a continuous process of ‘multiple becoming’. The dominant perspective on Chinatowns around the world refers to them as ‘ethnic enclaves’, yet the dynamic history and ongoing transformations of Manchester’s Chinatown show that it embraces multiple histories, contested present, and an open future.  The physical demarcations of Chinatown are less important than social processes and experiences which both define and escape the attempts to pin down Chinatown’s spatial and cultural demarcations.